Jeremy was a pupil at school during the founding year of the Tonbridge School Sailing Club in 1953. He was delighted and impressed by how much both had progressed in nearly 70 years. Jeremy kindly wrote a bit for Tonbridge Connect OT News about what his visit to the School meant for him and the memories it brought back.

Reflections on Tonbridge School over 70 years

I was lucky enough to be invited recently to visit the school, hosted by Jonny Moss in the company of John Gibbs, a near contemporary of mine, and expertly guided by the very knowledgeable Pietro Greco, the chapel verger. It had been prompted by my recent revelations about the exact year (1953) of the foundation of the sailing club, and my having been one of its first members.

Although I had been to several reunions of my year group I had not previously taken the opportunity to see all the wonderful amenities of which the school is justly proud. In particular I wanted to see the Smythe Library with its very impressive staircase bearing the names of Tonbridgian writers of fiction, the truly incredible sports centre and all the facets of the art school, design centre, workshops and scientific laboratories. The architecture of those new buildings alone is marvellous, not to mention the sheer quantity and variety of equipment and learning facilities which they contain.

After the tour we enjoyed a very good buffet lunch in what was once the School House dining room, which I had never entered in all my years at the school. The highlight of the day was the afternoon trip out to Bough Beech Reservoir with Jonny Moss and John Gibbs to see the sailing club in action. What a wonderful set up they have with several classes of boats and a huge expanse of open water on which to sail. I was most impressed by the warm and friendly yet respectful atmosphere between staff and boys and the quiet and efficient way in which the boys prepared and launched the boats. 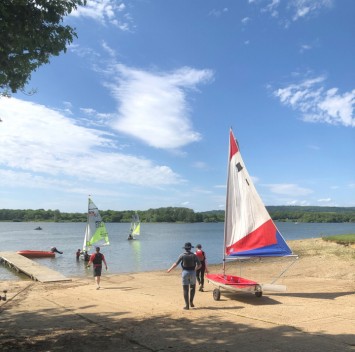 I suppose the most noticeable difference between the school that I attended and the Tonbridge of today is the more easy and friendly atmosphere among the boys themselves and in their relationship with the teaching staff. There is also of course much more variety in the nationalities of the students and a more varied and colourful dress code.

The infrastructure too has changed enormously. The main elements are still there: the chapel and the Head, Big School, Old Big School, the Upper and Lower Hundreds and Martins. The Fifty used to be situated off the Shipbourne Road behind a row of shops opposite Manor House. The swimming pool and sports grounds known as the Baths Fields were some way distant down Bordyke and beyond. The school’s layout was much more fragmented then; it is far better now that the facilities of the campus are more consolidated and of a very much higher quality.

Another aspect of Tonbridge which has changed for the better is its position in society generally. There is much charitable work being willingly done to engage with outside organisations and to bring the school’s amenities and manpower to good effect in the wider community. In the 1950’s my recollection is that the school was very much self-contained, an island in the town itself. In fact it seemed that the outside community felt a little sorry for and therefore charitable towards the boys; on Skinners’ Day at the end of the summer term, shops in the high street would place birch branches at the front of their premises to indicate that there would be some respite from the birching at least for the few weeks of the summer holidays!

Which brings me to the major point of difference. Although the 1950’s were way distant from the nineteenth century and there had been two world wars in between, Tonbridge like most of the public schools of that era were still very much institutions of Victorian “muscular Christianity” modelled on Dr. Thomas Arnold’s regime at Rugby School. It was a truly fearsome place for a trembling thirteen-year-old Novi with the ever present threat of a beating administered by an older boy or a master for even an accumulation of relatively minor misdemeanours such as being late or leaving some possessions in the wrong place. Not to mention the ignominy of having to fag, or effectively be the manservant of a senior boy unquestionably at his beck and call. Everything was compulsory for the whole school, chapel every day including Sundays even for day boys, some of whom travelled several miles; corps parades twice a week on the quad which was hardly ever used for anything else; watching and cheering at 1st XV matches, etc., etc. The “woke” generation of today would see this as a truly barbaric regime and as wrong as the nation’s behaviour in the era of slavery, and the building of an empire through ruthless exploitation and suppression of native peoples. But it was of its time, the zeitgeist, and one just got on with it. We were expected to respect authority unquestionably, a rather different concept from today where authority is rightly challenged - but the outcome is the same, as respect has to be earned. When our turn came, with increased seniority and maturity, to administer justice, then hopefully we did so with compassionate hearts.

There is no such creature as an average or typical Tonbridgian because in whichever regime we were educated we are all individuals. But because we were so privileged and fortunate to be educated in such a special environment, in the 1950’s, just as today, one would expect a Tonbridgian to have in varying degrees the qualities of politeness, affability, a sense of humour, a charitable outlook, a willingness and capability to lead and take responsibility, respect for all other people of whatever class, race or creed, and the twin virtues of honesty and integrity. And, of course, an educated and enquiring mind.

In my own case, as a scientist, I was most influenced by “Belch” Stredder (Chemistry), “Tin Fin” Morris (Physics), who had lost a hand in the First World War, “Alf” Thomas (Biology), who were all excellent teachers, and the long-suffering lab assistants Messrs. Hunt and Paine, who had to set up and disassemble equipment and experiments for practical classes.

But for relief from a constant diet of science there was the serenity of the art department, run by the excellent Mr. Harvey Adams, and much fun and enlightenment in the English lessons of “Chaps” Bradley. There was the redoubtable Dr. Alan Bunney whose exacting rehearsals in chapel led to the joy of singing hymns as a community really quite well considering that there were many who were obviously tone deaf! And of course, a special mention for Mr. J.R.Shirtcliff, a simply inspirational master in the workshops who led our little team of sailing enthusiasts in the building of the first of three wooden sailing dinghies, and for Mr. E.R. Bindloss, not just an enthusiastic Geography teacher, but an outdoorsman whose idea it was to start the sailing club, and with whom I worked closely as the club’s secretary in my last two years at Tonbridge.

My intention was to become a chemical engineer and I secured a place at Cambridge subject to passing three A-levels including maths. Chemistry and Physics were an absolute doddle and basic maths gave me no trouble whatsoever, but I failed at A level. Differential calculus was, and still is, a total mystery. So, I stayed on in the Upper Sixth for a further year and failed even better the second time! This was despite the magnificent efforts of the maths master “Eddy” Gray who steered countless others effortlessly through A-level. The fault was with me, not him. So in my last weeks at school I had no idea what to do until I saw on the careers notice board a letter from an OT Chartered Accountant seeking two articled clerks. In those days you could enter five-year articles with two A-Levels. A quite unexpected avenue had opened for myself and another, and the Old Boy Network had done the trick. We had secured an exit from school into the outside world. After five more years of study and exams, he ended up as a restaurateur in London and I became a financial and general management executive in the business of international freight and logistics. So much for career planning!

I have always enjoyed meeting other OTs of any generation along the way and comparing anecdotes and stories of schooldays. On one occasion I was in San Francisco to work out a deal for the North American subsidiary of my company with a bank based there. The banker was another Englishman and, over lunch, we discovered that we were both OTs, he slightly after me in the 1960’s. Naturally we both waded into reminiscing enthusiastically while our American colleagues sat aghast.

After a while one of them said “You bloody Limeys, you’re something else!”

And I suppose he was right. We are.

Our belated anniversary celebrations for the Sailing Club are held on the 11th June 2022 : book your tickets here by Wednesday 8th June - it's open to all!