It’s a great honour to be asked to select my Desert Island Discs for Tonbridge Connect. I’ve been asked to do something similar for Radio 3 later in the year, but this naturally takes priority!

Music has been a central part of my life for as long as I can remember, both as an enthusiastic listener and then as a (very amateur) performer, and I am sure that my choice will be a great solace among the sand and palm trees (I am assuming that it will be a warm desert island) until rescue arrives. So here goes.

This organ piece is majestic and thrilling, and has a special significance for me. My mother loved the music of J. S. Bach and this was played at the end of her funeral service. It was also the concluding voluntary in Hereford Cathedral for my wife Jane’s Legal Service as High Sheriff of Herefordshire. I hope that my recording can be played on the magnificent Marcussen organ in the School Chapel, by Julian Thomas, the School’s outstanding organist.

2. The Heavens are Telling, from The Creation - Joseph Haydn

I have sung in The Creation a number of times (only in the chorus!) and this is a great piece both to sing and to hear. Haydn’s handling (and blending) of the soloists and of the chorus is wonderful. There are other choruses in the oratorio I could pick – perhaps Awake the harp –  but this one just shades it: devotional and celebratory at the same time.

This is a setting of a poem by Tennyson. It is short, simple but subtle, and perfect. I would like it sung at my funeral. For the desert island I’d like it sung by the Choir of Lincoln College, Oxford, in which I sang for three years. They are much better now that they were then, but I do remember (as a very average bass) sitting next to a delightful and very capable contralto from St Hugh’s, who went on to great musical things: Dame Jane Glover.

I love the music of Parry – quintessentially English but with delightful melodies and masterful orchestration (as a young man, he sought lessons from the great orchestrator Brahms, but alas Brahms was not available). And in Parry’s centenary year (he died of Spanish ’flu in 1918) it’s good to remember his mark on English music – his pupils included Vaughan Williams, Gustav Holst, Frank Bridge and John Ireland – and he himself wrote a huge range of music, from songs to symphonies, and of course Jerusalem. Parry wrote that tune in a day, on 10th March 1916, and handed the music to Henry Walford Davies with the words “Here’s a tune for you, old chap. Do what you like with it”.

I wanted a couple of recordings to act as intervals in the music, so here is the first one. It comes from a Test Match against the West Indies in August 1991. Ian Botham was batting, played an extravagant stroke, tried to step over his stumps and just dislodged a bail. Jonathan Agnew remarked that Botham “just didn’t quite get his leg over”. Brian Johnston, also in the commentary box, manages to keep going fairly seriously for about fifteen seconds, and then completely collapses in snorts of laughter, through which you can hear him say “Aggers, for goodness sake, stop it”. It happened during the early evening rush hour, and thousands of motorists had to pull over because they were laughing so much. It is supposed to have caused a two-mile traffic jam at the entrance to the Dartford Tunnel.

Because I live in Herefordshire (and my daughters went to a prep school where Elgar was for a time a music master) I must have a piece by this great English composer, but even more a composer from this part of England – the Marches. I’m going to cheat a bit because I am on the Board of Voces 8, which I think is one of the finest a capella groups in the world. They have recorded a vocal arrangement of Nimrod from Elgar’s Enigma Variations which is of course normally an orchestral piece. I enjoy playing the organ arrangement of this (usually on Remembrance Sunday) but Voces 8’s rendering (to the words Lux Aeterna) is absolutely magical. It has had more than a million hits on YouTube. Try it and you will see why.

I don’t apologise for another piece of Elgar. Many years ago I heard his Sea Pictures on Radio 3 (I think it was probably still the Third Programme in those days) sung by Janet Baker and conducted by Sir John Barbirolli. I was captivated by it, and went straight out to buy the recording. I would like the whole of Sea Pictures but, if I can have only one movement, I will go for the first, Sea Slumber Song. This was the start of a life-long enthusiasm for Dame Janet’s incredible talent (and the acquisition of most of her recordings). When I was Chairman of the Hereford Cathedral Trust she came to the Three Choirs Festival, which was in Hereford that year. I turned up early for a garden party in the Deanery, and Janet was sitting in the Dean’s garden. We chatted about music, performance and life for three-quarters of an hour. It is wonderful to find that someone you have admired from afar is even more delightful and impressive than you had thought.

Another non-musical choice. Ideally I would like the whole of Blackadder, which my family seem to know by heart. But if it is to be one episode, then it must be the Elizabethan one which begins with Blackadder teaching Baldrick to count (“If I have two beans, and then I add two more beans, what does that make?” “A very small casserole, my Lord), and Blackadder gives up with the words “To you, Baldrick the Renaissance was just something that happened to other people, wasn’t it?....try and have a thought of your own, Baldrick; thinking is so important. What do you think?” “I think thinking is so important, my Lord”. It’s still brilliant stuff.

8. Men of Harlech - Quick March of the Welsh Guards

My last choice. I love military band music, and I am going to go for Men of Harlech. As I was born in Wales, and took a Welsh title, I think it is probably appropriate. It also happens to be the Regimental Quick March of my grandfather’s Regiment. I think that playing this very loudly for the benefit of the palm-trees and the parrots might be good for my morale.

If only allowed one record? A toss-up between the Bach Great G Major and Sea Pictures, I think. Don’t make me choose. 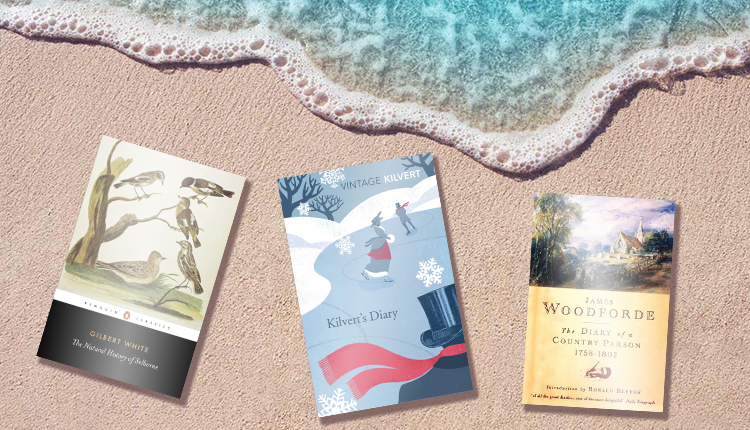 A book, given that I will already have the Bible and Shakespeare? I think something in the diary genre. Gilbert White's Natural History of Selborne, with its unassuming, razor-sharp observation, might just qualify, although it is in letter form. Or perhaps the Diary of The Revd Francis Kilvert, set in the parishes around us in Herefordshire and just over the Welsh border. Kilvert’s last parish was Bredwardine, three miles away, where I have played the organ for weddings that Jane has conducted.

On balance, though, I will go for The Diary of a Country Parson, by The Revd James Woodforde, who spent the last thirty years of his life at Weston Longville in Norfolk. His Diary (never intended for publication) is kindly, honest and charitable and is a wonderful portrait of rural life in the late 18th Century. There is unconscious humour – as a young Fellow of New College, he notes that he dined “in Hall last night off roasted tongue and udder. NB shall not dine again off roasted tongue and udder very soon.”. Domestic expenditure is meticulously recorded, as is the weather – even to the chamberpots in his Norfolk Rectory freezing during the night of 25th January 1795. So too are the sometimes heroic meals: “We had for dinner a Breast of Veal ragouted, a fine Piece of boiled beef, a Pidgeon Pye, Custards, Puffs and some Lemon Cream.”

Parson Woodforde’s Diary was the only book that my grandmother would read for the last three months of her life, and that is good enough for me.

And what about a luxury?  I would quite like a pipe organ and a lot of music, but I think that the instrument would go horribly out of tune in the sea breezes, so instead I will go for a complete set of cricket kit, a net and a bowling machine. That way, if rescued and I can still walk, my batting might have slightly improved.