Listen to Will Biddle (PH 76-81)'s Desert Island Disks, featuring Bob Marley and The Wailers, The Doors and Van Morrison. With only three TV channels and a strict rationing of viewing at home, I grew up playing family games most evenings whilst listening to the sounds of Dad’s predominantly classical record collection; Beethoven, Tchaikovsky, Mozart, Dvorak and others, and when old enough would make my own selections and put the records on the turntable myself. Quite a privilege! Mum had a more modern taste, so we also had artists like Chris Montez, Bert Kampfaert (with his signature slap bass sound, groovy!), The Beatles, Carpenters and Simon and Garfunkel to choose from. This track from the latter’s album ‘Bridge Over Troubled Water’ takes me right back to those happy childhood days of family time in the evenings.

2. Stir It Up - Bob Marley and The Wailers

Music has been a central and important part of my life since I first listened to those records, and I would religiously watch Top of the Pops and The Old Grey Whistle Test on BBC TV to feed my appetite. As a boarder at Tonbridge in the late ‘70’s, we spent free time listening to tapes and records, and being a teenager ‘pushing against’ the system (in my relatively safe way!), I was drawn to the music of the emerging punk and new wave scenes through bands like The Ramones, The Clash and The Jam. It was also at this time that I formed my lifelong love of reggae with its political and spiritual themes. British roots reggae acts like Steel Pulse and Matumbi were particular favourites, as was of course the legendary Bob Marley and The Wailers, here performing ‘Stir It Up’ live on the Old Grey Whistle Test.

It was also often to reggae that I would dance with my twin girls Grace and Ruby in my arms when they were still young enough to carry. One at a time that is! I am so happy that they have inherited my love of music, and still enjoy many of the artists I introduced them to.

3. Riders On The Storm - The Doors

David Bowie was proving a big distraction from studying in the sixth form as I pored over his album sleeves and lyrics during prep, and I would also spend time before going to sleep listening to the pirate station Radio Caroline. Lying in bed in the dark one evening, 'Riders On The Storm' came on. I found it utterly captivating, and it reminds me of that time in my life when I was becoming aware of a wide and unknown world beyond my own that was beckoning.

At University, my best friend used to play a cassette in the car entitled ‘The Best of Stax’. They were happy carefree times, and black American soul was now another genre to explore further. I had a great opportunity to do so travelling and working around the world on a GAP year after graduating. I had some  cassettes with me, one of which was ‘The Best of Otis Redding’. Here he is singing the Sam Cooke classic ‘A Change is Gonna Come’, which transports me to travelling solo through the massive and changing landscapes across America in a Ford Mustang.

I had discovered hip hop in America on my GAP year working in Connecticut, and have followed it ever since, being especially interested in the art form that gave another voice to African Americans. In the ‘90’s when I was back at University for my teacher training, artists began fusing hip hop and jazz. US3’s version of an old Blue Note jazz classic had me hooked and takes me back to being a ‘mature’ student in the Union bar cavorting with much younger undergraduates!

After so many years of discovering music across all genres, it still surprises me to this day that I can find old treasures that have passed me by. I was teaching in Norfolk and in my thirties when I properly got in to in The Beach Boys. Supper parties with friends at that time would often end up with sing-a-longs to their tunes. Pet Sounds is a ‘must have’ album, and the opening track ‘Wouldn’t It Be Nice’ showcases Brian Wilson’s writing and arranging genius, as well as the gorgeous vocal harmonies the group is famed for.

A strong contender for my all time favourite artist is Van Morrison. It was serendipitous that I fell in love with and married an Irish girl, Tara, and this track in particular reminds me of our shared love of his music and of her.

Tonbridge Chapel has been a big part of my musical and spiritual life. I love singing hymns with Tonbridgians and have enjoyed countless musical performances by them as soloists, small groups and symphony orchestras. There is one piece that stands out however, mostly due to the fact that it is played annually by David Williams on our magnificent organ. It is called ‘Mad Rush’, and was composed for piano by Philip Glass, a minimalist classical composer, and a founding father of the genre. I enjoy particularly its meditative, hypnotic qualities. Here is Philip Glass himself performing it live. 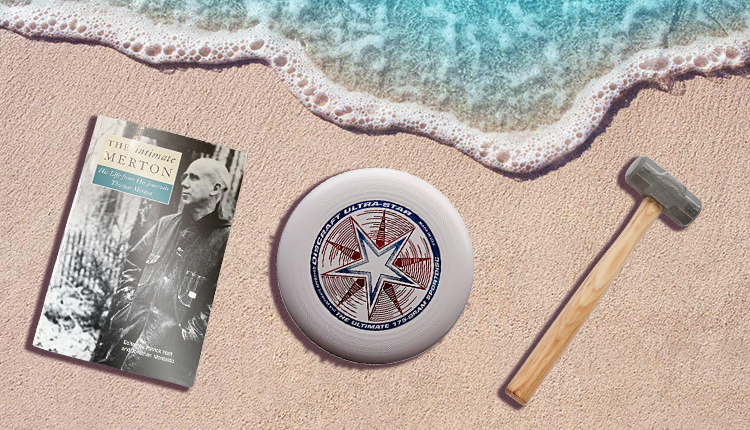 As with music, my reading has been extremely eclectic over the years, so it’s very difficult to pick only one. I will however go for a book that I am currently re-reading after a ten-year gap. It was given to me by Martin Beaumont our previous Chaplain; he had used extracts as the basis for some Chapel talks which I had found very helpful. It is ‘The Intimate Merton; a selection of entries from the journals of Thomas Merton’. It is a deeply personal account of the spiritual journey of an American Trappist monk, and conveys the wisdom gained from the personal experiences of a great spiritual teacher through his life's major challenges, his confrontations with monastic and church hierarchies, his interaction with religious traditions east and west, and his anti-war and civil-rights activities. I find it inspiring, refreshing and faith affirming.

My luxury item, could have been a Frisbee. A simple luxury, but one that has given me so much pleasure over the years as a player and a coach of Ultimate Frisbee. However, it won’t be much use without someone to throw with, and I can’t guarantee finding a native on my desert island to fulfil that role! I’ll pack one anyway as an ‘essential item’!

I will therefore ask instead for a work bench and full set of hand tools so that I can design and make things. My years teaching art and design have given me skills that I often take refuge in from a busy life, and I find myself continually inspired to create objects, both functional and purely aesthetic.