Tonbridge runners-up in the 2022 Halford Hewitt

Under the leadership of new captain, Christo Lloyd, Tonbridge had a fantastic run in this year's competition before eventually losing to defending champions, Loretto, in the final. Every match was closely contested. The results were as follows: - 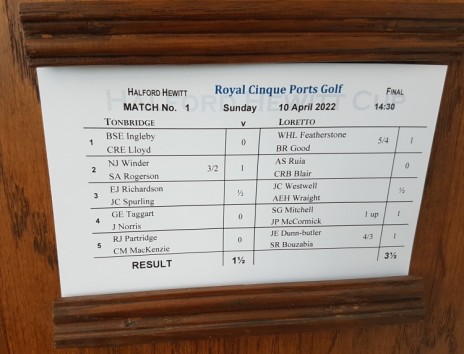 Our team this year was a blend of tried and tested match golfers (George Taggart, John Spurling, Richard Partridge, Ed Richardson, Christo Lloyd and Brian Ingleby), a debutant who rose to the occasion splendidly (Simon Rogerson) and youth (Nick Winder, James Norris and Calum MacKenzie). Everyone at some point or other made a significant contribution, including Jason Foster, who stood in for Ed on Friday afternoon.

Loretto have a fine team, with a combined handicap of +27! They will be strong for many years to come. But Tonbridge, having won this particular completion 9 times since 1990, are still a major force to be reckoned with. It will be interesting to watch how the team evolves and performs in the next few years. Whatever way you look at it, it was a great start for Captain Lloyd, who built on some strong foundations laid by his predecessor, Richard Partridge.