Peter Fincham, renowned British television producer and executive, kindly returned to Tonbridge to give us a talk about 'Life in Broadcasting' We were delighted to welcome back OT, Peter Fincham, last month for the Tennant Lecture Series.

David Tennant introduced Peter and reflected on how his career in television began, with founding TalkBack productions with Mel Smith and Griff Rhys Jones, which became well known for the quality of its comedy output, including, They Think It's All Over, Never Mind the Buzzcocks,  I'm Alan Partridge, Smack the Pony and Da Ali G Show.

Between 2005 and 2007 Peter was Controller of BBC One, with a programming budget of £873 million, and then moved to become Director of ITV in 2008, and as such, we were honoured for him to share his wealth of experience with us, and tell us what it’s like to work in broadcasting in the age of streaming, Sky and Netflix, the future of the BBC and its licence fee.

Peter began by reflecting on his time at Tonbridge School and how he felt he didn’t particularly shine at anything, which perhaps gives hope to the students at Tonbridge and elsewhere today who perhaps feel the same way, that they can still have a future and very successful career despite not being amazing at sport or academia.

One teacher in particular Peter remembered as having encouraged him and supported his taste for the arts – drama, music and poetry, and having done the same for generations of boys: Jonathan Smith, who was in attendance and received a round of applause from the audience.

Peter spoke of how he went on to study English at Cambridge aged 18, probably too early he now considers, but joked that even the college he got into was considered the outer Siberia of Cambridge Colleges.

Peter gave a fascinating overview of the twists and turns that can influence a career in television as compared with perhaps the more defined ‘work and reward business’ careers, and often alluded to being in the right place at the right time, or self-effacingly, luck finding him.

In his first week he went to the college fair and came across the ‘Cambridge Footlights’ stall who were looking for people who could perform sketches or write songs and Peter had aspirations of the latter.  When he went for an appointment with the musical director of the Cambridge Footlights (Alex Ingram) Peter was overawed by his musicality and tried to walk out without explaining why he had come.  By chance Alex asked him on his way out whether he happened to play bass guitar, and as it happened, Peter did.

He explained how this moment was a turning point of luck in his career. He was given the chance to play bass for the next pantomime the Footlights were performing with Griff Rhys Jones as the main part, which is how they met. Ten years later, Griff had become a well-known comedian, along with Mel Smith, and they both had a small production company, ‘Talkback’ above a shop in Carnaby Street with two employees and a typewriter.  At the age of 28 Peter had given up hope of trying to become a musical director in a theatre and felt that all his friends had overtaken him in their careers. By chance, the person who ran ‘Talkback’ had decided to leave to become Rowan Atkinson’s manager, and Peter explained how Griff and Mel asked him to take over, which felt like a lifeline to him, and that’s how he got to where he is now.

….“ So that’s how my television career had begun, randomly. That’s what’s different about the media vs the ‘proper professions’…..  a degree of luck and self-belief, and you’re in!”

But there is no doubt about his talent for producing some of the nation’s best loved programmes into being.

Peter reminisced that whilst the average television producer wasn’t much of a fan of Mrs Thatcher, in 1987 she actually did the sector a huge favour when she passed legislation that the broadcasters were required to take at least 25% of their output from ‘Indies’ (independent production companies) as there was no competition between the 4 channels of the time. By chance, the 'Alas Smith & Jones’ contract was up with the BBC, and at a meeting that year it transpired that the BBC were looking for people with independent production companies - and Griff and Mel had one. When putting together the budget for the programme, Peter called himself ‘Executive Producer’ on the form, having had no training and not knowing what one was, and said he’s still not sure, much to the amusement of the audience.

Peter discussed how, over the next 20 years, Talkback Productions went from being in a room above a shop to one of the country’s leading production companies. In 2000 after its valuation was buoyed by the dot com boom, it was sold to Pearson TV, then to Freemantle and in turn, was bought by a German conglomerate.

He explained how the 90s were an exciting time to be an independent producer - it was his job to find the talent, package the ideas and sell them to broadcasters.

Peter showed the audience a very good clip from Alan Partridge where Alan is trying to pitch ideas for a new TV programme to the executive (Tony Hayers) and he used that as a metaphor as to how he knows it’s a lot more comfortable to be pitched to than doing the pitching.

Peter went on to discuss the threats to UK television by the streaming services Netflix, Amazon and others and how we are living in turbulent times –which are keenly felt by the BBC.  "The BBC mostly has a fixed income and carries the burden of being the National Broadcaster needing to look at everything it does looking through the lens of public service.  Governments tend to be hostile to the BBC – both Labour and Conservatives think its journalism is biased. It’s the BBC’s job to hold both to account – thank goodness. 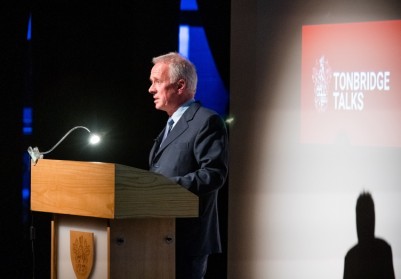 Viewers see it differently, they see David Attenborough, Strictly Come Dancing and Radio 4 and much more – broadly they like it –are equivocal about having to pay for it, but accept it’s good value…   voters won't thank a government for taking a wrecking ball to the corporation to save them about £13 per month. It’s always on the agenda as to whether the BBC will survive".

Peter mentioned he has a book on his shelf called, ‘The Last Days of the Beeb’ by Michael Leapman which was published in 1986 and the fact that it has survived his dire predictions by about 40 years shows it has an instinct for survival. Peter said that at the BBC there is a feeling that the end is forever nigh, the public love their output but they don’t want it to look too comfortable.

He compared it to another much loved institution, also paid for by the public, the Royal Family – so he observed that when the BBC and Royal Family clash you get an electrical storm of epic proportions.

This lead on to ‘Crown Gate’ as it was known at the time. Peter discussed his appointment after leaving Talkback when he was invited to become the controller of BBC 1 – seemed like an impossible offer to refuse in 2005. He felt that finally, he had fulfilled his late mother’s life long wish and “got a proper job”.

Peter said that he loved the BBC – liked the public service remit, really liked his new colleagues, and without the pressure of commercial return.  However, a couple of years later the electrical storm hit.

He relayed how the BBC had commissioned a documentary about the Queen – the producers had put together a short compilation tape to sell it to international markets – unfortunately, this had been “sexed up” to make it look as though the Queen had walked out of a photoshoot with American photographer Annie Leibovitz– she hadn’t! She hasn’t walked out of anything in her 70 years on the throne.   Somehow the edit had found it’s way into a presentation Peter gave to the press and all hell broke loose. He recounted how The Daily Mail headline writers loved this – the BBC crisis and the Royal Family was like all their Christmases had come at once.

He is very philosophical about the event, about the unpleasantness of being in the eye of a media storm and empathy for others being hauled over the coals; he explained that it’s not the fuss that gets you in the end, it’s the report. He advises that it’s never a good look to hang on – the man at the top had to pay the price, one needs to take responsibility and resign even if it’s not your fault.  Finally, his advice to others is, “don’t complain”. Others said for years afterwards that it was unfair he had to leave the BBC despite being credited with dramatically improving BBC1’s fortunes. He never felt that – someone had to take the rap and it was him.

Not long after, Peter was appointed as ITVs new Director of Television. He enjoyed eight very happy years at ITV – when the X Factor ruled the airwaves and Downton Abbey became the UKs biggest creative export. Towards the end of his time at ITV – he began to think he wanted to switch roles from the sketch he showed earlier, and play the Alan Partridge role.

In 2017 he decided to start his own new production company with Tim Hincks. They had been playing together in a rock band for some years and called their production company “Expectation” after the Rolling Stones song “No Expectations”. Now they make a huge number of programmes of all genres, including comedies, dramas, documentaries – including the very popular hit, Clarkson’s Farm.

He reflects that you never feel successful – you never reach the sunlit plateau – you just see another peak in front of you that you have yet to climb. To illustrate this, he showed a clip of a new series coming out called The Chelsea Detective – which dropped on Acorn TV recently and will be shown around the world. The significance to Peter is that it represents his debut as creator and screenwriter and that he’s loving doing something new and infinitely more satisfying that just a being what his old friend Griff would call ‘a suit’.

He ended with the poem “What Then” by WB Yates, circling back again to his English teacher, Jonathan Smith:

His chosen comrades thought at school
He must grow a famous man;
He thought the same and lived by rule,
All his twenties crammed with toil;
'What then?' sang Plato's ghost. 'What then?'

Everything he wrote was read,
After certain years he won
Sufficient money for his need,
Friends that have been friends indeed;
'What then?' sang Plato's ghost. ' What then?'

All his happier dreams came true -
A small old house, wife, daughter, son,
Grounds where plum and cabbage grew,
poets and Wits about him drew;
'What then.?' sang Plato's ghost. 'What then?'

The work is done,' grown old he thought,
'According to my boyish plan;
Let the fools rage, I swerved in naught,
Something to perfection brought';
But louder sang that ghost, 'What then?'

Peter Fincham takes up his new position as President of the OTS Society after the AGM in May succeeding Sir Sherard Cowper-Coles.

Please see the photos below (you need to be logged in to view these):

To view this News Article